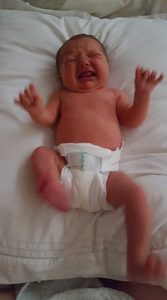 Colic is the name for a collection of symptoms with varied and sometimes unknown cause – could be trapped wind or upset tum or food intolerance or something else.

There are a variety of things sold to help with colicky symptoms but they work in specific ways and address just one potential cause so won’t work for everyone.

Infacol is simeticone which basically just reduces the surface tension of bubbles of gas trapped in liquid so they join together. Dentinox is dimethicone which does the same thing.

Colief (or Lactaid) is lactase drops, which help break down lactose in the milk if the body has a lactase shortage or the milk has too much lactose for the body to handle.

Gripe water has different ingredients depending on the brand, but the UK’s most sold brand Woodwards contains dill oil which they say ‘warms and relaxes the tummy, breaking down trapped air bubbles’ and sodium hydrogen carbonate (we know it as bicarbonate of soda) which they dubiously claim ‘neutralises acid in the baby’s tummy’. These are non-evidenced claims: 5ml of drinkable liquid does not contain enough of anything to change the temperature or ph of the stomach. The other thing is that the sodium bicarb works on the hydrochloric acid in the stomach, forming a combination of sodium chloride (salt), carbon dioxide (gas) and water – so gripe water can actually CAUSE the formation of gas.

It’s thought a possible action is of the dill is actually as an oligosaccharide (complex carbohydrate) which feeds the friendly bacteria, and the reason gripe water seems to work is that it tastes nice to baby so they are simply happier. Of course when we were babies, gripe water contained alcohol…!

There are various herbal and sweet tasting remedies which either aim to make baby care less about the cramps in their tummy, or to feed the good bacteria in baby’s tum, but the efficacy depends on what baby needs.

Recently some products known as ‘probiotics’ have started to be marketed to parents, to be given directly to baby. Probiotics are bacteria. The so-called ‘friendly’ bacteria, but nonetheless they are bacteria, and too many of any kind of bacteria can have undesirable affects on the body.

So, why would you deliberately give bacteria to a baby? There is an argument, for supplementing the microbiome (the internal microbial flora and fauna of the digestive system and skin) of a baby whose microbiome has been compromised by its method of birth, illness of the mother, smoking in the home, formula feeding, or some other factor. However, to do that successfully, we would need to know what was missing from the microbiome, not just supplement with a random couple of strains of bacteria. It’s possible that in the near-ish future there will be labs offering tests of stool samples to identify which bacteria we have lots or little of, in our poo, so that we can appropriately ‘treat’ the unbalanced microbiome. Until that time, I feel very uneasy about the idea of giving bacteria to vulnerable babies, without any idea of what the balance of their microbiome might already be.

Some products have been specifically made and targetted towards breastfeeding babies. These are particularly naughty, because actually the mother’s milk can provide all necessary bacteria as well as the prebiotics for the friendly bacteria to eat, if the mother’s milk contains them. So with the breastfed baby, the wisest course of action would be to supplement the mother, not the infant. And with a far broader spectrum product than that.

Anyway, if a baby is struggling with painful trapped gas, then working out where the gas is coming from ie how it’s getting down there to begin with, is a good place to start. Usually from crying, or from issues with the latch to the breast. If you cannot figure it out then expert and experienced infant feeding support will be your best bet.

There are also some ways of holding baby which help – both during feeding and after – but these need to be taught to the individual. What seems to work best for ‘burping’ or ‘winding’,  is having baby upright, facing you, with their tummy pressed against you, their bottom half in the middle of your body, and their head on your right shoulder.